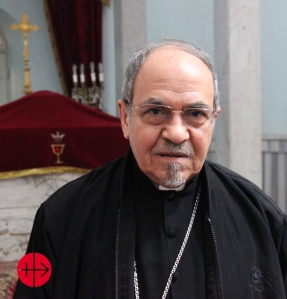 ACN, Montreal / Königstein – Thursday February 19, 2014. “The Church in Egypt has been strengthened by the murder of our brothers in Libya.” These are the words of the Coptic-Catholic Bishop of Sohag in Egypt, Youssef Aboul-Kheir, on Wednesday (18.2.2015) when talking to the international Catholic pastoral charity Aid to the Church in Need (ACN).

The Bishop went on to explain: “Persecution is part of the life of the Church. The blood of martyrs is the seed of the Church. In Europe the Church is free. We, on the other hand, are faced with many obstacles. But which Church is the stronger?” The Coptic guest workers murdered by the Islamic terrorist militia ISIS in Libya were genuine martyrs, the church leader said. “They suffered a holy death with prayers on their lips. They went to their deaths just like the early Christians.”

The Bishop stressed that he had received many telephone calls from Muslim friends after the murders had been announced on Sunday. “They told me that it was their problem rather than ours. It was Egypt and the Egyptians who had been attacked, and not primarily the Christians.” It had certainly been the terrorists’ intention to force a wedge between Christians and Muslims, Bishop Aboul-Kheir said. “But this plan didn’t work, quite to the contrary. Many Muslims are angry because of the murders. President Sisi visited the leader of the Coptic Church to convey his condolences. And the President travelled to the home of the murdered ones. You can see that the attack has united us Egyptians.”

The urgent problem of church construction

Bishop Aboul-Kheir conceded, however, that he himself was afraid of the extremists in Egypt: “I am afraid of the Salafists in the country. They speak with forked tongues. The Muslim Brotherhood is opposed to society anyway. So there exists an internal danger in Egypt itself.” In view of the imminent parliamentary elections Bishop Aboul-Kheir expressed his concern that individuals with extremist convictions could be elected: “That can happen because many of the candidates are not known to the population.”

It was important, however, that the next parliament should address the urgent problem of church construction, which had to date been subject to all kinds of restrictions. “It is crucial that we Christians in Egypt should finally be able to live as equal citizens,” Bishop Aboul-Kheir emphasized. There should also be a reform of the religious debate on the part of the leading Muslim authorities in Egypt. “The Al-Azhar University is regarded as a moderate force. But in fact there are many things in its teachings and programs which are anything but moderate. For example, the use of force in cases of apostasy by Muslims is justified. This is in contradiction to moderate views. The Al-Azhar University must correct its program,” the Bishop explained.